I first heard about Speech Buddies at the 2010 ASHA convention.  I thought it sounded like such a great idea, but could they really work???  Well, after using Speech Buddies for several weeks, I believe they really do work!  I used the /r/ Speech Buddy with a 7 year old client who was not stimulable for /r/ before using speech buddies.  His baseline data was 0% for /r/ in all positions.  We used the /r/ probe throughout the first one hour session.  One week later, the client achieved 60% accuracy for producing /r/ in all positions of syllables while using the /r/ Speech Buddy probe.  Some increase is expected in the early weeks of therapy.  However, a 0% to 60% increase is greater than I would normally expect to see.

How do Speech Buddies work?  There is a probe for each sound.  I used the /r/ probe which is pictured on the bottom left.  You place the probe in the child's mouth and instruct them to unroll the coil while saying /r/.  We practiced saying /r/ in syllables at first (ie. re, ray, rye, eerie, ear). After achieving success with /r/ in syllables, we tried to move to /r/ in words.  It was difficult for the client to produce the entire word with the probe in his mouth.  Instead, we started with /r/ syllables using the probe, moved to /r/ syllables without the probe, and then moved to /r/ in words.  The probe offered enough tactile support to get us started and assisted with generalization of the "good /r/" into words.  I have struggled for years to offer this type of support to students struggling with /r/ production. 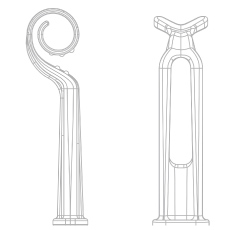 Talk It Up
Hello! I'm a Speech-Language Pathologist who has been inspired to share some of my ideas online. My name is Ashley and I work with students in grades 1-8. Recently, I have been loving Pinterest ideas and my iPad for use during therapy. Come back often to see what activities are motivating my students to talk it up!